In the summer of 1992 I received a phone call from my father. This was highly unusual so I knew straight away something was wrong. It was, he had been diagnosed with non Hodgkin’s lymphoma, a lymphatic cancer. In his usual calm and self assured way he assured me there was nothing to worry about and he would soon have it licked.

He continued to hold on to this assertion and I think managed to convince the family that it was the case. It was easier I suppose than looking too hard at the alternative.

By the early part of 1993 there were signs that perhaps this time my dad wasn’t going to get his way and his health was slowly declining. On March 27 after talking about my concerns for my dad with a friend in my flat in London I got an intense stabbing pain in my stomach as I walked across the room. Somehow I felt it was to do with my dads health and the next day I drove the 200 miles to my parents house.

It was immediately apparent that my mum had been downplaying my dads condition. It was a bad habit of hers, intending not to cause worry for others, but in reality I think reflected an element of denial of how things really were. He was pretty much bed bound but when I arrived still able to get up to use the toilet and get to the bathroom.

It was just four years since I had begun doing healing work. . I spent the whole first day sitting with my dad and holding him in the healing energies.I wanted a miracle, I wanted to save him, and on that first day I still hoped I could. I did the same thing the second day and as the day progressed I realised my hope was in vain and that what was actually happening was an easing of the bonds to this world. I wasn’t healing my dad, I was helping him leave. It was probably the hardest moment of realisation in my young life.

I had one more day with him, my dad by now knew himself what I had sensed. I will always be proud of the quiet dignity with which he faced the end of his life. By this point he could no longer get out of bed and I had to hold a jar for him to pee in. He was clearly in pain and accepted the inevitable with peace and confidence.

It was a hard lesson for me as a young healer to realise that the miracle I wanted wasn’t going to happen and that if anything my dad was going to pass more quickly. I continued to sit with him, to play a part in easing his passage, and I shed many tears. He passed in the early morning of the fourth day since I’d arrived, my mother and I both with him. They were three of the most precious days of my life.

I have subsequently worked with a number of other people in their process of transitioning out of their bodies and this world, including my mother. I am grateful to say I was also at her side in her last moment. In every instance the experience was humbling and often inspiring. This fragile fleshy form and this strange and beautiful world contain an ever present mystery of non physical nature. In the process of dying the veils between them are less certain and in working with those dying we can feel with them across these subtle boundaries as they negotiate their return there, and that is a beautiful thing. 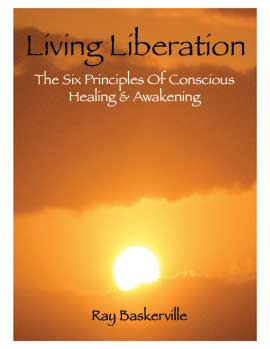 This review is from: LIVING LIBERATION - The Six Principles of Conscious Healing & Awakening (Perfect Paperback)

A year or two back I came across an Ezine artile titled, "Karma & The Law of Attraction." I am generally interested in this topic, so I gave the article a read. - I was exceedingly impressed and fascinated with the insight and clarity with which this writer expressed his ideas. Writers of spiritual topics, and particularly 'New Age' writers do not always have sufficient understanding to so vividly and concisely articulate their thinking.

At any rate, the article was so awfully good that I have decided to purchase Baskerville's book. I think this may be someone with something to say. When I have read the book, I will return to post my review.

Thanks for that article, Ray. I have read it, and learned from it.

I did the read the book. It far surpassed anything I anticipated. I am struck by the years of spiritual process it required for Mr. Baskerville to have arrived at such clarity, and simplicity. - I hesitate to say much here for fear of limiting this book with my words. Thank GOD. That is how I feel. Thank GOD I found this little book.

Transpersonal coaching is a relational engagement with the process of Becoming that is the fundamental movement of life within each of us. Transpersonal means the integration of all that we are, spirit, mind, body and the Being nature that is beyond them. At the levels … END_OF_DOCUMENT_TOKEN_TO_BE_REPLACED

After a profound and powerful spiritual awakening in 1986 I began spiritual life and practices. In that awakening, I saw and experienced the interconnectedness of all things and actions, the great weave of life, and the truth that there is nothing accidental in … END_OF_DOCUMENT_TOKEN_TO_BE_REPLACED